We don't hear until we're ready

My 18-year old daughter has always shown signs of giftedness, complete with overexcitabilities. Her emotions being one of them.

She has known for years that we just took it for granted that she was gifted. She often rejected us thinking it. But she doesn't even seem to remember now that we ever told her, as a matter of fact.

This morning, in a bright mood, she told me she'd learned all kinds of things last night. In addition to certain details involving the cast of "Once Upon a Time" ;), she said she'd learned that she was gifted (I laugh now because we've never hidden our belief about that!) and she learned about one of the excitabilities: emotional intensity.

Her reading about the ties with giftedness and intense emotions of any kind, it was like a weight has been lifted from her. And yet, she'd heard things about it from me before. So what's the difference?

This is sooo Montessori, isn't it?

Don't get frustrated or fall into despair if your children of any age aren't hearing something that is as plain as day to you. It's no different from presenting the right materials/lessons to the young or elementary child. If they're not ready, it's just not going to click.
Posted by Daisy at 11:33 AM No comments:

Imagine that early December, you got hit with a sudden, unexpected and out-of-your-control financial difficult. It's bad.

Imagine after that, you found out your 10-year old son has a large cancerous tumour in his chest. So large it's larger than his heart.

A friend of mine, someone I've known since we were in elementary school, has a son in grade 5. I'll call him C. His best friend is Jorge, a young boy whose family is experiencing the above.

C has seen two beloved grandparents pass from cancer in recent years. He knows what it means. He has been found crying in bed at night. (And I can't type that without crying.)

Please, I ask all of you reading, pray for him and share this GoFundMe page. Yes, I want you to share it more than I want you to donate. I absolutely would like everybody to donate. I know that if all of my FB friends would donate just $10 each, the GoFundMe would go up by over $1300. That's just $10. So yes, of course, I would like you to donate, but I know that the reality is, the more people who see this, the more people will donate. So, if you do not feel called to donate, at the very least share this on Facebook, Twitter, your own webpage, anywhere and everywhere. They are in serious need and have not posted all of the details. 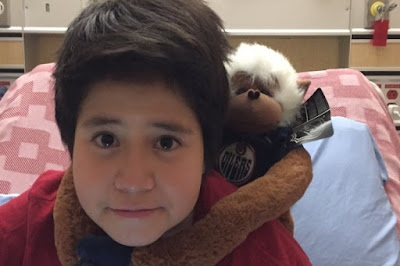 https://www.gofundme.com/jorgeandres
Posted by Daisy at 6:12 PM No comments:

Bringing My Son to Life

Which means a few things:
I was reminded lately that the last reason can often be the result of boredom: someone who is bored, who doesn't know what there is to do will turn toward entertainment because it's interesting. Meanwhile, it's like part of them is slowly dying.

This the boy my mother once described as a kid who really enjoys life. He doesn't anymore.

"How are you today?"

"Mm." His body language all day is one of being half-alive.

Me, I end up falling into the, "Omg, there's so much not done and we're running out of time so we need to do more [of all the activities he hates]" and don't help him discovering the more interesting things in life.

Today, I saw that life back in him. What did we do? He started out all blah as usual, upstairs in his room, watching some YouTube video (I was out running errands when he got up). We hadn't gone out to do anything in sometime, so I asked him if he wanted to go to the mall for lunch, then we could stop at the Apple store to pick up a new power cable for the Macbook he's using. Getting him out to the mall just helped liven him up. Visiting the Apple store did even more. Going to Canadian Tire after that (I needed new wiper blades and we looked for a new audio cable for the car), showed a side of him I haven't really been seeing lately. Then we went home and I helped him minimally make chocolate chip cookies and then he got busy covering the power cable with electric tape to protect it from fraying and kitty chewing (grr) and he's just ALIVE. It's so good to see.

I'd had thoughts before Christmas of starting our days with a walk. I didn't implement it. Why not?

Because I stupidly thought that because he wakes up so late, if we take a walk first, we'll have even less time to get work done.

Well, you know what? He is so unhappy about school, he's already not getting much work done. There are things I can do to find different ways to cover what needs to be covered, different activities that we could do together that will accomplish the same things.

What's more important here? To get all this school work done by the end of June and have an unhappy, half (or 3/4)-lifeless teen, or find ways to help him connect with the world around us, get him moving and doing life-filled things? Things can be stretched out to meet the requirements for the diploma. He can take an extra year. He can just accept crummy grades this year. It's not a big deal in the long run compared to raising a young man who know how to live.

So, that's it: my focus is on bringing him back to life. Get him involved more in cooking supper. Going out for walks and skating (we now have a skating rink nearby and he has brand new skates). Reading to him more from books that have nothing to do with school work. Have him think about what he would need to do as an adult to have a balanced, healthy life. Guiding him toward a balanced, healthy life now. I don't need to ban the electronics, just invite him to other things. Yes, still fitting in school work, condensing where possible, getting him WRITING (gah, yes, still an issue), but that's secondary. He needs to be brought back to life. And by golly, I'm going to do what I can to make it happen.
Posted by Daisy at 3:27 PM 1 comment: